Designed by Irish born architect, Francis Johnston, Townley Hall, near Tullyallen in Co. Louth, was built between 1794-1798.  Said to be his masterpiece, it was his first major private commission and is now listed as a building of National Importance.

Louth County Council have recently granted planning permission for Phase II.  This phase will include a new permanent roof to the wing, bedroom & bathroom accommodation as well as lift serving three of the four floors of the house.

The proposed new addition has a simple minimalist expression, inspired by the ordered composition and austere simplicity of the Francis Johnston design.

The design concept followed is to add an identifiable contemporary layer to the historic house, in line with conservation principles. However, rather than aiming for contrast, the guiding principle has been to find an architectural solution which is subordinate and deferential to the historic house.

The design process included extensive consultation with Louth County Council Conservation Section and the Department of Arts Heritage & the Gealteacht as well as presentations to The Irish Georgian Society and An Taisce. 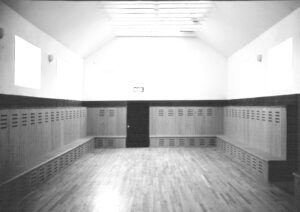 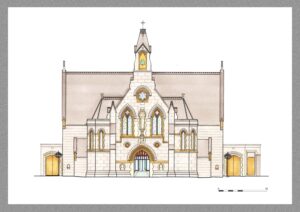 Facebook-square Instagram Linkedin
Designed by Mamma Marketing
We use cookies on our website to give you the most relevant experience by remembering your preferences and repeat visits. By clicking “Accept All”, you consent to the use of ALL the cookies. However, you may visit "Cookie Settings" to provide a controlled consent.
Cookie SettingsAccept All
Manage consent

This website uses cookies to improve your experience while you navigate through the website. Out of these, the cookies that are categorized as necessary are stored on your browser as they are essential for the working of basic functionalities of the website. We also use third-party cookies that help us analyze and understand how you use this website. These cookies will be stored in your browser only with your consent. You also have the option to opt-out of these cookies. But opting out of some of these cookies may affect your browsing experience.
Necessary Always Enabled
Necessary cookies are absolutely essential for the website to function properly. These cookies ensure basic functionalities and security features of the website, anonymously.
Functional
Functional cookies help to perform certain functionalities like sharing the content of the website on social media platforms, collect feedbacks, and other third-party features.
Performance
Performance cookies are used to understand and analyze the key performance indexes of the website which helps in delivering a better user experience for the visitors.
Analytics
Analytical cookies are used to understand how visitors interact with the website. These cookies help provide information on metrics the number of visitors, bounce rate, traffic source, etc.
Advertisement
Advertisement cookies are used to provide visitors with relevant ads and marketing campaigns. These cookies track visitors across websites and collect information to provide customized ads.
Others
Other uncategorized cookies are those that are being analyzed and have not been classified into a category as yet.
SAVE & ACCEPT